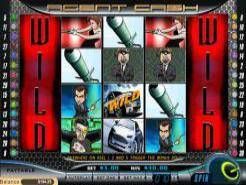 Play Now
Featuring a number of cool-looking, Matrix-style dressed, highly skilled assassins, Agent Cash slots is a slightly upgraded online gambling game with a suitably gritty metallic visual style. The game has 5 reels, the whole of 30 paylines and quite a lot of other tools from awesome symbols to extraordinary bonuses, all of which are specifically designed to fill your wallet to the top. The smallest coin can be 1 cent and the biggest one-10 dollars and with this refreshing 30 lines set up, the maximum bet becomes 300 dollars.

There are numerous agents and tools that can potentially appear on the reels and make your day so much better in terms of your financial state and in their dangerous business profit is possible only from left to right. To start off, there is a symbol of a spy with dark hair who has a pistol for a weapon and if players get five of it on the reels, an award of 800 coins will be granted. On the flip side of the coin there is the symbol of the otherwise very influential heat-seeking missile but in this game it doesn’t have such a great impact since five it awards just 100 coins. The jackpot can be won through the Eye-Patched Dr. Smiley symbol. Three of it will give you a very minimal award of 100 coins. Five of it however will grant the player the highest award of the game, which is a jackpot of 10,000 coins. Place the maximum bet on the jackpot and you get 100,000 dollars-it’s the kind of a kill one can get only by playing big and bold.

The wild symbol of the game is The Aston Martin, an obvious but very appropriate homage to the James Bond franchise. As a wild, it replaces all the symbols apart from the Jackpot symbol and the Bonus symbol. Multiple Aston Martins parking on the reels will also deliver a personal payout of their own that ranges from 50 coins to 1250 coins. The surprises don’t end there. The second wild of the game-The dark-haired Bond Girl. She can dazzle gamblers with her beauty on the first and the fifth reel and when she shows up on either, she will multiply and cover the whole reel. The scatter symbol is another Bond girl but this time she is Blonde. She can make an appearance on the 1st, 3rd or 5th reel and she only needs to show up on either one of these in order to initiate the bonus game.

The bonus games of the online slot devoted to global secret service agents are just as compelling as the symbols themselves. Basically, there are two bonus games in Agent Cash Slots and all of them get unlocked through the Blonde Bond girl. Once you get the necessary bonus unlocking combination you will be presented with a choice that can go three ways for you: a free spins feature, a straight up cash award or Pick or Die feature. The last of the three will take you to a new screen where you will be joined by the golden-hair girl and Dr. Smiley Face at a table that has thirty cards. Each of these cards is affiliated with an award and each one of these cards might have a trap that stops the bonus round. Your job is to gran as many awards as possible before stumbling upon the so-called “Stopper”. Or, you can go with free spins option, which will bring you 8 additional spins, which will be decorated with privileges, such as a Wild symbol which can appear on the third reel and transform between 2 or 15 symbols in a way that will create multiple winning combinations. Naturally, the option can be retriggered if you wish but you can be sure that you will be restarting this particular slot game many times over.
Play Now