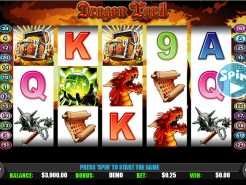 Play Now
The right word to describe Dragon Master slots is epic whether one wants to talk about its gameplay or its visuals. As the game loads the first thing that will grab your attention is a gigantic red dragon and it’s the type of beast that is drawn so spectacularly that it might as well have come out of a high budget fantasy TV show or a movie. That, however, isn’t even the main character. The protagonist is actually riding the dragon, dressed in an epic suit of armor, holding an awesome sword with lightning coming out of his hand. That image alone can immediately put you in a heroic mood to go ahead and take big risks and of course-bring home big awards, which this game surely provides. There are five 5 reels and 25 paylines in the game. The minimal value of a coin is set at 1 cent and the maximum is at 10 dollars and you can choose whatever amount you want. What you can also choose between is the number of paylines you want to activate. Symbols pay from left to right with the exception of the scatter. These are the laws of the jungle, or is it more correct to say-the laws of the dragon’s lair. Keep these in mind and you are ready for the hunt.

Symbols of the Dragon

There are at least 10 symbols in this game that will greatly contribute to the increase of your earnings in your Dragon Master run. First off, the ordinary card symbols from 9 to A are included in this slot. They are the symbols which pay the least. Apart from them, you can get on the reels some truly powerful allies. Those are a Weapons symbol, a Dragon one, a Magical Scroll one and there is also a Treasure Chest icon. All of these will be invaluable in your mission to defeat the dragon and grab a hold of its treasure. The wild symbol in this game is the Dragon Slayer and the scatter symbol is the Green Orb. The wild can replace every other weapon with the exception of the scatter Orb and every time the Dragon Slayer completes a winning combination the earnings you get from it will be multiplied by two. As far as the scatter symbol is concerned if you get at least two of the Orbs on your reels, you will receive your coins back, which is quite a rare of a quality. Furthermore, the Orb has the power to unlock the free spins feature provided players collect at least three of it. When that happens, 10 free games will be awarded. Whatever earnings are acquired during the free games will be multiplied by two and naturally, the whole process can be restarted as soon as you collect another three scatters.

The battle will be fierce but profitable and every risk you take can be gloriously rewarded so Dragon Master slots is a game of two big pleasures-the feeling of defeating a great beast and the feeling of bringing home a tremendous amount of money.
Play Now