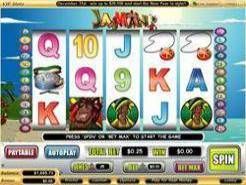 Play Now
Ja Man Slots has adopted the atmosphere of the holiday seaside beach season. It’s a theme that is well popular outside the world of online gambling so even those who are not too devoted to the online slots can relate to it. Ja Man’s got five reels and twenty-five paylines and has pretty much the full package of classic online slots, including a wild, a scatter, a bonus round, a jackpot and much more. It’s a wonderful reminder just how profitable for emotions and your pocket Jamaica can prove to be.

Symbols of the Beach

The symbols of this hot, sunny party of a slot game are the Jamaican Man, who is also the wild symbol, the scatter symbol which is the Hut, the Jamaican Girl, the Drum, the Beach, the card symbol King, Ace, Queen, Ten, Nine and Jack and the Peace Necklace symbol. The Jamaican girl is rightfully the most special symbol. If you get five of them on a single payline you will be awarded with the superb 5000-coin jackpot. The silver medal goes to the Beach symbol which can in similar circumstances deliver 2000 coins. However, the party doesn’t stop there. If you get a Jamaican Man in a winning combination both of those jackpots can be doubled; the Jamaican Man doubles everything that is awarded in a winning combination, in which the man is participating. Speaking of him, the Man can replace every other symbol except the scatter symbol. It shows up on the second, third and fourth reel. As far as the scatter symbol is concerned, it can also be considered the life of the party. So if a player receives at least two Huts, an award will be given. To be more specific, three Huts give 15 spins, four-20 spins and five-25 spins. All together you can win up to 100 times your full bet through the appearance of 5 Huts on your reels.

Rules of the Seaside Party

The total bet in Ja Man can be as low as a cent and as high as 250 dollars. Bet per coin can be 1 cent, 5 cents, 25 cents, 50 cents, 1 dollar, 5 dollar or 10 dollars for a line. The game offers a special Bet Max button through which you can play with every one of the 25 lines together. The free spin option is a bit more special then it tends to be with other games. Here, it can not only be retriggered but it also rewards the player with a multiplier of 3, 6 or 10 which is chosen randomly.

Ja Man Slot is a perfect reason for you to adopt a holiday attitude and if you don’t feel like it-don’t worry, the game will help you restore it in no time.
Play Now