Luck o’ the Irish Slots: The Money Spell of the Leprechaun 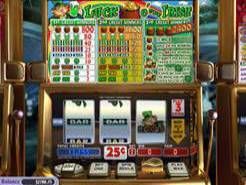 Play Now
Luck o’ the Irish will truly enchant your imagination with its incredible coloration, its perfect suitably magical animation and that happy, bearded, dressed in green from head to toes leprechaun. Everything on the screen will be brimming with delight-the lighting looks beautiful whether we are talking about the gorgeous background or the exquisitely crafted looks of the reels-just looking at it will make you feel lucky. The game features five reels and surprisingly-4 rows and you can play with as many as 40 paylines: naturally you can change that-you might as well go with 10, 20 or 30. Furthermore, this is a game, which aims to provide its players with the full slot experience-profitable symbols, wilds, scatters and additional bonus games.

The symbols that will work their magic on your wallet include those iconic Irish objects which signify luck, like for instance the horse shoe, the leprechaun itself and the pot of gold. There is also a three-leaf clover to be found on the reels, which is admittedly a surprise-you’d think it would be the famous four-leaf version but apparently not. There is also a three beer glasses symbol. There are plenty of winning combinations which involve three of the same symbols and the naturally, the ones which deliver the highest payment are those with five matching symbols. The winning combination will work from left to right. The highest paid symbol is the beers. Five of those will grant 400 coins. The 2nd place goes to the clover, the five-symbol combination of which will earn players 300 coins. Apart from the typical Irish symbols there are also the regular card symbols from 9 to Ace and they are the ones, which you will most likely see on the reels. At first glance, these payouts might appear to be relatively small-particularly for combinations consisting of five of the same symbols but as soon as you start playing, you will realize that the combinations will arrive faster and more often than in other slot games. The reason why players will witness a lot of winning combinations and that also supports the luck theme of this game is the stacked wild of the game. There will be plenty of instances when the wild symbol will cover the entire reel and through its ability to complete potential winning combinations, a lot of possibilities for numerous earnings will appear. Five wilds deliver 500 coins.

The only irreplaceable symbol of the lot is the bonus symbol. The scatter symbol is the one bearing the title of the game and it serves as the activator of the free spins round. The free spins in Luck o’ the Irish are unique and remarkable to say the least. A new exclusive symbol-a golden coin with an image of the happy leprechaun will show up on several places all across the 20 possible positions of the reels and then proceed to transform in one of the rest of the symbols available in the game. Basically you will have the same symbols on multiple locations across the reels. Now consider the fact that the stacked wild will most likely appear throughout the 5 available free spins and when those two symbols combine their effects and combinations some breathtaking financial miracles are bound to take place. Also, there are very high chances that you retrigger the free spins throughout any of these five so be prepared for some serious fun if you do unlock them. Luck o’ the Irish Slots is just as fun as it sounds-when you are not continuously making money, you can just sit back and enjoy the visual symphony of spectacular colors on your monitors.
Play Now