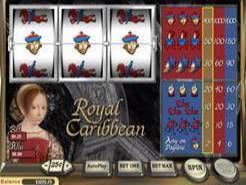 Play Now
Do you know that peculiar historical period when the Caribbean wasn’t in the control of the infamous pirates but rather in the hands of the Royal British Empire? Those disciplined and orderly times is exactly what the theme of Royal Caribbean Slots is trying to go for and judging by the nearly medieval looking picture in the background, they are most definitely succeeding in shaping an atmospheric environment. The gameplay itself is even more striking and quite satisfying for this classic set up of 3 reels and a single payline. The maximum number of coins with which the player can bet is 3 and there are six coin sizes: 10 cents, 25 cents, 50 cents, 1 dollar, 5 dollars and 10 dollars. If you’ve played many slot games with a similar reel set up, it won’t come as a surprise for you that there are no bonus games or special symbols or extra features with Royal Caribbean Slots-this is a game that will make you rich simply through winning combinations and a big jackpot, which is the cherry on the top.

Symbols of Her Caribbean Majesty

The reels of the Royal Hall, from which the great queen will be deciding the fate of the lovely islands is filled with very useful symbols all of which will bring your kingdom into an era of financial prosperity. Your most trusted agents will be the Kings, the Hands, the Horsemen, the Jesters, the Traditional Kings and the Dancing Jesters. The top dog among the loyal servants of Her Majesty is The King symbol, whose crown actually resembles a colorful hat in blue and red but just so you know-it’s a crown and that’s the symbol that can bring you the jackpot that is 1600 coins. In order to get it you have to get a triple King symbol combination, to play with a three-coin bet and to bet the maximum coin size, which is 10 dollars. If you manage to satisfy those three demands, you might end up taking home 48 000 dollars. That being said, the second best symbol of the game is very much low-paid in comparison to the top one. It is the Jester one and a triple combination for 1, 2 and 3 coin bets the payout will provide 50, 100 and 150 coins. After that, the most valuable servant of the Crown is the Traditional King, which pays 30, 60 and 90 coins for the three-coin bet and again-a triple combination. The Hands symbol triple combination pays 20, 40 and 60 coins respectively. That is followed by the Horsemen combination, which will grant gamblers 10 coins per a single coin bet. The weakest triple combination is the Dancing Jester’s one and it gives 5 coins for every coin bet before the spin. With that, the services of her Majesty to your pocket end. All in all, she offers a solid jackpot prize and a number of different profitable symbols, all of which amounts to a solid slot game with a simple set up, which doesn’t have useless details but it also lacks impressive ones.
Play Now