Dolphin Reef: A Sea of Multipliers 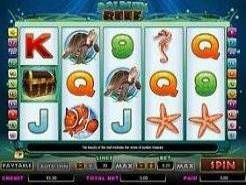 Play Now
Dolphins are extremely attractive creatures: they are probably the most beloved inhabitants of the oceans so it is only natural that a number of slot games with a theme about them exist. Here, the dolphin is not put on a pedestal; he is who he is-a sweet looking, good-mannered dolphin that has the habit of providing players with huge awards, while being surrounded by its many underwater friends. Dolphin Reef Slots has five reels which will quickly get filled with all kinds of profitable winning combinations and icons. Furthermore, you will find a satisfying number of extra features in the game in terms of both symbol effects and additional rounds. The game is also available on a great number of applications and platforms so you can get access to it pretty much everywhere.

Symbols of the Dolphin

Apart from the adorable protagonist of the game, players will get the chance to meet many other beautiful creatures who have a symbol in the game. There is a turtle, a clown fish, a sea horse, a starfish and others. All of these will treat you with exceptional generosity when it comes down to payouts. The more of the dolphin’s associates get caught in players’ nets, the more their earnings will rise. There are winning combinations in Dolphin Reef Slots which involve these underwater creatures can deliver a multiplier on the bet that can be as low as 5 and as high as 250. What is required by the player is to collect at least three of those particular symbols. There are even more spectacular awards in the game like for instance the payouts of the winning combinations of five of the Seahorse symbols or the Star Fish symbols which will actually increase your bet 500 times. If for any reason, you don’t find this award satisfactory you should probably aim for the Turtle symbols. Catch five turtles on your reel and the multiplier will grow to 1000. At this point, you are probably thinking that a multiplier of 1000 is the cherry on the cake and is more than enough to be the game’s biggest reward but you are mistaken. Get the Clownfish five times on your reels in a spin and you will receive the reef’s most treasured award-5000 bet multiplier. That being said, your wild symbol is the Dolphin and the scattered symbol is the Treasure Chest. The Dolphin can replace all the other symbol except the Chest. In this game The Dolphin also activates the free spins so he gets a lot of work done.

Have a Reef Vacation

Settle in for a great experience in this lovely dolphin home. It’s a reef full of gigantic surprises, which will win you over in full and you will return to play Dolphin Reef again and again .
Play Now