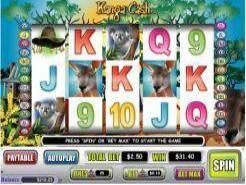 Play Now
Kanga Cash Slots is yet another slot with a tropical atmosphere attached to it but it still manages to stand out on its own with a few memorable details as far as looks are concerned. You could say, however, that the game can be easily distinguished or at least identified as one which deliver unusually giant awards. Profitable symbols, numerous winning combinations and a huge jackpot is what the adorable kangaroos and koalas have in store for you. The slot is in possession of 5 reels and 25 paylines and has the usual wild and scatter symbols and very special bonus feature (not free spins). There are 21 different coin sizes in the game. The lowest one is 1 cent and the highest one is 10 dollars. That makes the highest bet 250 dollars for a game and you are urged to run with it-otherwise you will never know just how generous that hot exotic land is.

To start off with the best of the best, the highest paid friend you can meet on your reels will be the Kanga Cash kangaroo. Get five of these and you can bring home 10,000 coins. The silver medal goes to the old miner’s hut symbol, which will also grant you tremendous earnings and the bronze remains for the miner symbol. Get five of these hard-working chaps and they will return you the favor with 5000 coins. Next is the Koala symbol which is also a very lucky, not to mention, sweet thing to behold on the reels. Apart from melting hearts it also grants players with 2500 coins. There is also the Australian hat symbol which once collected can deliver 750 coins. The same value has the bucket on a pole symbol. These symbols-the Kanga Cash Kangaroo, the old miner’s hut, the miner himself, the Koala, the Australian hat and the bucket on a pole will also give players separate payouts when you get at least two on the reels. If you have already lost the count of the bonus rewards you might get in the game, you shouldn’t feel bad. Furthermore, the card symbols make a dignified appearance in this spectacularly profitable game. All the symbols from 9 to A will give you coins in the range between 5 and 300 if you get at least three of this type of symbol on the reels.

Kanga Symbols and Even More Bonuses

The wild Kangaroo symbol can take the place of the rest of the symbols with the exception of the scatter Huts. The scatter symbol activates the special feature that goes by the name of Panning for Gold. To enter this extra game, you have to land at least three of the scatters. Get five scatters and you will increase your bet 200 times. The bonus game will take you to a screen where a Miner is getting ready to pan gold. He will pan 6 times at the most. Every time he will reveal pieces of gold, which vary in size. The smaller shards will give smaller awards and the larger ones will pay bigger. The awards consist of multipliers on the bet that range between 2 and 100. The moment, the trusty minor shows you an empty pan this precious bonus round will come to an end.

It may sound too good (or too big) to be true but it is what it is. Enter this spectacular safari and return home with a bag full of gigantic treasures.
Play Now