Safari Hunt Slots: As Beautiful as it is Profitable 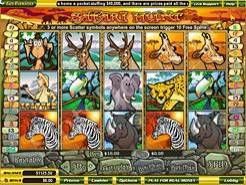 Play Now
With a lovely to look at Lion King-like background, wonderful diverse colors and a stylish rocky surrounding of the reels, Safari Hunt Slots will satisfy the needs of the passionate online gamblers who require a good-looking slot. Furthermore, the admirers of suitably packed with special symbols and extra bonus features games will be pleased with the countless, well-drawn icons and the multiple opportunities for profit they can provide. The game has 5 reels and 20 paylines. The smallest value of a coin is 1 cent and the largest one is 10 dollars, which forms up a maximum total bet of 200 dollars for a single spin.

Tools and Targets of the Hunt

You will have plenty of equipment on your journey to the safari, which will be of great use for your hunt for wealth in the vast African landscapes. The 4 Wheel Drive is the game’s wild symbol, whereas the Tour Guide is the scatter one. Naturally, the 4 Wheel one can replace the rest of the symbols in the game with the exception of the Tour Guide and the bonus game symbol. The 4-Wheel wild is capable of delivering the highest award in the game, which is a multiplier of 10,000 on the initial bet of the player. The second highest award in the game is 750 dollars. Additional symbols that will make an appearance are basically the most popular inhabitants of the beloved animal kingdom of Africa-the elephant, the lion, the rhino, the flamingo, the wild ox, the zebra and plenty of others as a matter of fact. There is also a tree symbol and the regular card symbols from 9 all the way to A. All of these symbols will be paying the gamblers if three of them show up on after the reels have stopped spinning.

The free spins can be activated through the Tour Guide symbol. Land three of it on the reels and 15 free spins will be awarded. Obviously once you have made the best out of the first batch of free spins you can always land three more scatters and reinitiate the free spins bonus again. To increase players’ admiration for the free spins option ever more, the game also adds a bonus multiplier of two to the total earnings from free games after every spin. Apart from that there is also a very fun bonus game. It gets activated by the bonus symbol which is a Camera. Get this profitable high-tech recording device on the second, the third and the fourth reel and the game’s main bonus game will be started. Players will be presented with eight exotic safari locations and they will have to select one of them. As soon as they do, a number of different animals will be presented on the screen and choosing one will reveal a prize. There are two hidden symbols behind each of these animals and they are the paw-print and the animal symbol. The former puts a stop on the bonus game and the latter lets the player enter another full of riches wild place and so on and on until eventually the paw stopper symbol is received. Safari Hunt slots is a beautifully looking game with gorgeously illustrated animal symbols and an addictive, not to mention-extremely profitable gameplay.
Play Now