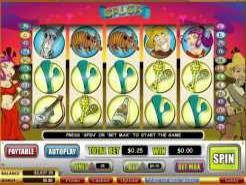 Play Now
Get in an appropriately Mexican mood with Salsa Slots, an online gambling experience with simple animation and an easy to understand gameplay mechanics which provide quick and unsophisticated way of earning money. The background is that of a weirdly colorful desert-like landscape and it is really not all that remarkable. What should catch players’ eyes is the reels because the symbols there are much more memorable and not simply because they deliver solid profits to the gambler. Salsa Slots is geared up with 5 reels and 25 paylines which allow for 36 different winning combos. The peculiar thing about this slot game is that you can only be awarded one winning combination in a spin. For instance, if you land two winning combinations the one with the bigger reward will prevail and those with a smaller payout will be discarded. Coin sized fluctuate between 1 cent and 10 dollars and with 25 lines, the maximum bet happens to be 250 dollars (25 coins).

The wild symbols in this empty but nonetheless extremely profitable Mexican wasteland is rather surprising-the red bean. Nonetheless, it has two satisfying capabilities. Firstly, it can replace the rest of the symbols in the game, except for the scatter symbol. Secondly, every time the wild in this slot shows up on a payline, the payout of that entire line will be doubled. As far as the scatter symbol is concerned, there is another visual surprise for gamblers there in the fact that it is yet again, a bean but this time its color is green. The rest of the symbols in the game include a pair of maracas, a cactus (like the one you see at the background of the game), a man, a woman, an armadillo, a guitar and a donkey. Each one of these symbols is highly memorable in its drawing style and entertaining to look at.

The green scatter bean has the ability to activate the slot’s bonus feature. All that players have to do is to collect three scatters on an active payline. The bonus round represents a new screen, where you will see a number of boxes. Selecting a box will reveal symbols-if you uncover three of the same you will be rewarded and even if the symbols don’t match you will still receive a prize but smaller of course. Your eventual earnings out of that particular box-opening bonus feature are calculated by multiplying the reward of the scatter symbol combination with the bet for the spin. You can go ahead and win 75,000 dollars out of Salsa Slot’s bonus games if your luck works on 100 percent. There is another bonus round which gets initiated when more than three scatters appear on the reels. The second bonus round is a matching game-you have to match three symbols and if you do you will win the appropriate prize. The game’s top reward amounts to 100 000 dollars and this sum stands as Salsa Slot’s jackpot. There is a rapid fire progressive jackpot featured in the game that doesn’t get won by a game, it gets rewarded randomly and all you can do is to put as bigger bets as you can afford.

The Rich and Quiet Wasteland

The game’s background isn’t very spectacular but in the case of Salsa Slots, there is so much more than meets the eyes and awards in the hundreds of thousands of dollars are potentially waiting for you just behind the corner, or should we say, the box in the desert.
Play Now