X Marks the Spot Slots: Gamblers of the Caribbean 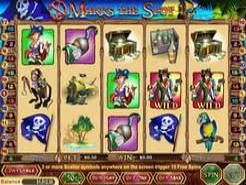 Play Now
In terms of both its gameplay and visual design, X Marks the Spot is one of the most colorful gambling games you’ve ever played. As the title suggest, the game’s theme is tightly connected to treasure seeking and pirate adventures. In the background of the originally looking reels, the frames of which are wooden sticks tied with natural ropes, you will see a beautiful blue horizon with the pirate flag, a big ship and the jungle of an island. There are 20 paylines in the game and on the 5 reels you will see a huge array of imaginatively drawn icons with a great level of detail in all of them. X Mark the Spot also provides gamblers with free spins, bonus round and special symbols. Coin sizes start at 1 cent and go as high as 10 dollars. If you do the math, you can figure out on your own that the maximum bet is 200 dollars. Symbols pay from left to right, except for the scatter ones, who are free in either direction.

The wild is the pirate. It has the ability to replace the rest of the symbols in the game. The only symbol that can’t be substituted is the bonus symbol and the scatter symbol. Talking of the scatter, the Cannon can single-handedly deliver the player a payout if two of it appear on the reels, regardless of their position. Three of the cannons will unleash the Free Spins Round. Throughout these, everything you win will be multiplied by three, except for the bonus games earnings acquired during the free spins. Obviously, the free spins can be retriggered if you get another 3 Cannons during the first 15 that are awarded. If you are lucky enough you can reactivate them again and again. Other symbols include a rum stash, a monkey, a parrot, a captain’s villainous hook, deserted islands, a pirate redhead woman which looks surprisingly gorgeous and very attractive, a skull, a Pirate flag and a pirate ship.

Find the Bonus on the Treasure Map

The bonus level in the slot can be unlocked through the bonus symbol, which is the Treasure Map. You can expect it to appear on the first, the third and the fifth reel and in an activated payline. At this point a bonus button will appear and when the player clicks it, he or she will enter the bonus game. It is built up of three levels, in all of which the gambler will be presented with a map that contains various X symbols. You will have to choose 1 out of 8 X symbols in the first level and 1 out of 3 symbols in the second and the third level and payouts will be delivered accordingly. In the third level (map), the player will be able to choose whether to keep the earnings that have been acquired throughout the bonus game or spend them all on a key, which will unlock the treasure chest-in it there might be an award bigger than what you’ve gained throughout the bonus level or it might be smaller-it’s up to you to decide whether you want to take the risk. There are no two ways to say it: this is a great slot game, which gives you the full experience-special symbols, bonus games, great visuals and plenty of winning combinations and playing it will definitely give you the very pirate urge to take risky and thrilling leaps in the name of big profits.
Play Now