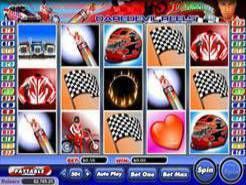 Play Now
Daredevil Dave slots actually derives very little from the great superhero when it comes down to the name. The main character is also the protagonist of a video game who is famous for making impossible stuns. This living-on-the-edge adventurist also has his own slot game and through his spectacular feats he can bring gamblers online numerous profits. The slot is in possession of 5 reels and 15 paylines, plenty of profitable symbols, two bonus rounds and lots of other small and big pleasant surprises. Needless to say Daredevil Dare slots has very satisfying visual and sound design.

The wild symbol is a number one passionately lit up on fire. It has three effects. The first one allows it to multiply by two the earning made out of every winning combination on the reels. The second one is the ability to replace every other symbol in the game with the exception of the scatter symbol and the bonus symbol. The last one is the jackpot winning combination which is basically five of the burning 1s on an active payline. That is one award you do not want to miss. There are two scatter symbols in the game and both of them include a shiny trophy that has a flag for a background with a chess-like coloration. They also have a variety of valuable capabilities. If you get a couple of either of those two symbols you will receive a multiplier of two on your bet. When you collect three cups in the very least you will activate the free spins bonus.

Free spins will make your gaming experience even better because every award you win during them will be multiplied by three with the exception of the number of free spins you receive. The maximum free spins you can get 15 for three scatter symbols-that’s the best deal. The bonus symbol of Daredevil Dave Slots is a fancy race car with exceptional paint job. What you need to know about this sweet ride is that it parks only on the second and the fourth reel. You will be able to drive off into the game’s second bonus round if you manage to find two of these cars on your active payline. The first positive effect this additional feature will bring to your gambling day will be a multiplier of your prizes that equals the number of paylines. Once the second bonus round starts you will see a jump icon. The Daredevil Dave will attempt three jumps. The first will be over a row of motorcycles, the second will be over a row of race cars, the third will be over a Boing Plane (he might fail at this one) and there is one last, which is the riskiest one and that is a jump over the Grand Canyon. Obviously you will reap the rewards after every jump but as you can guess the likelihood of success grows thinner with every challenge.

In the hands and feet of Daredevil Dave you should trust. He’s not an actual superhero but he can bring you a lot of money through his exploits and your moral support is all he needs to make you rich.
Play Now