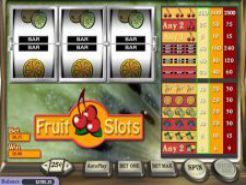 Play Now
Featuring one of the “healthiest” slot themes ever, Fruit Slots is a simple game with unsophisticated visual design, which however will prove to be good enough to make you crave a big basket of delicious real-life collection of the symbols of the game and judging by the game’s name you can imagine what those are. Fruit Slots will show gamblers all kinds of delicious treats of this kind on its 3 reels and sole payline. The coin sizes are five-25 cents, 50 cents, 1 dollar, 2 dollars and 5 dollars. The maximum bet is 15 dollars since the maximum number of coins is 3. Apart from the appropriate amount of winning combinations which in this case equals 12, the game also features a very solid jackpot of 2500 coins, which is followed by a secondary one, the worth of which is 500 coins. That is pretty much it-the game ultimately happens to be as simple as it looks-there are no bonus games, wild symbols or complicated rules. You just have symbols and simple combinations which will bring you one profit after another and with a little bit of luck-grant you one of the two big awards.

The game’s fruit stash includes the Water Melon, the Plum, the Orange, the Lemon and the Cherry. Other symbols also include a general Fruit symbol and a Bar one. On the top of the fruit food chain lies the general Fruit Symbol. If you play with 3 coins and you land 3 of the Fruit Symbols on the reels, the award will be the top prize of 2500. Two of these symbols grants 75 and one gives 15. Next up are the BAR symbols. There are three of them-a one level one, a two level one and a three level one. The BAR symbols offer the most profitable winning combinations after the Fruit Symbols. 240 credits will be awarded for three of the triple BAR-s. Three of the double ones deliver 120 and the single ones will pay 60. All of these BAR rates count for 3 coins. And then we get to the fruity section of the profitable combinations. There are four fruits which pay in equal measure when 3 coins are on the line. In this case, 30 credits will be paid for three watermelons, three plums, three oranges and three lemons. The cheapest fruit is the cherry. Three of it will give you 15 credits and that is if you are using 3 coins. The lowest paying winning combination also involves the cherry symbol-basically you need any two fruit symbols and the cherry in a combination and this will grant you 9 credits, again with 3 coins being into play. There are no two ways to say it: it’s a simple game but that doesn’t omit the possibility of big awards or its counterpart-the possibility of minimizing the risk at hand so regardless of the style of play you prefer you will be feeling comfortable with Fruit Slots.
Play Now