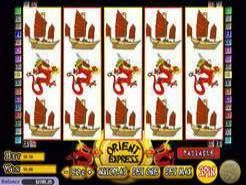 Play Now
Orient Express Slots is not your typical slot game neither when it comes down to looks, nor when gameplay is concerned. Both the surprises and the awards the game is capable of providing players with also exceeds expectations by a long shot. The rules are simple enough and common-the value of the coins can be as low as 1 cent and as high as 10 dollars. At the end of the day, if players decide to bet at the highest possible rates they can bring home a jackpot of 2500 coins. The huge variety in terms of the size of the awards and the bet makes this a universal slot game for all sorts of players. The game provides an extremely comfortable autoplay feature, which has many options of its own including duration of time, the number of spins and amount limit. The 21 paylines of the game include three horizontal lines and 18 lines which are a mix of horizontal and diagonal lines. This mixture all together raises the players’ chances to score multiple winning combinations in one go.

The symbols in Orient Express slots are all about staying true to the game’s theme. You will recognize on the reels a dragon, a bonsai, a gong, a chest full of riches, a tiger, a ship and of course, a samurai: in short, all the things you love and recognize Asia by. The awards of Orient Express Slots are big in both numbers and size. To start off, the huge 2500-coin jackpot will be awarded to the player that successfully gathers five of the dragon symbols on an active line. Then four of the precious dragons will deliver 1000 coins, three will bring 250 and two of them will grant 20. The gong symbol is also capable of handing out huge profits to lucky players. Five gongs give 1000 coins, four of them bring 200, three give 50 and two of them grant just 5 coins. The bonsai tree will also deliver money to the guy or girl, which lands five of the symbols. Four trees get you 100 coins, three-30 and a couple of trees bring 5 coins. Another symbol-the tiger, is also quite profitable. Five of it will bring you 250 coins, four will bring 25 and three will bring 10. The chest of money pays 100 coins if you get your hands on five of it, four chests equal 20 coins and three of them will trade you 5 coins. The honorable samurai will pay 25 coins if you get five of them in your army, while four will pay you 10 and three will pay you five. The lowest paid symbol is the ship. Five deliver 15 coins, four bring 10 and three pay 5.

Rarely has a slot game been this profitable. It will make you rich in every way-culturally and financially, not to mention you will feel full emotional satisfaction after a single game of Orient Express Slots.
Play Now